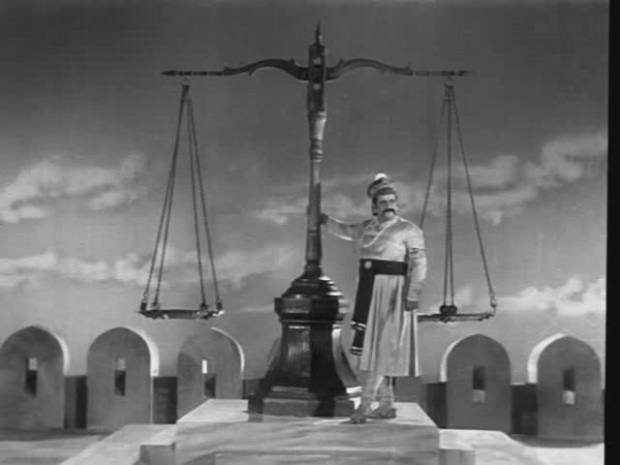 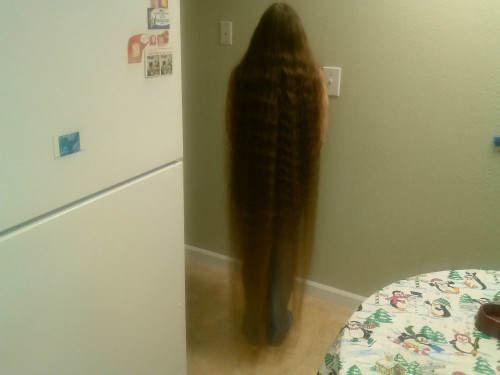 In The Curve by JOSEPH WALSH 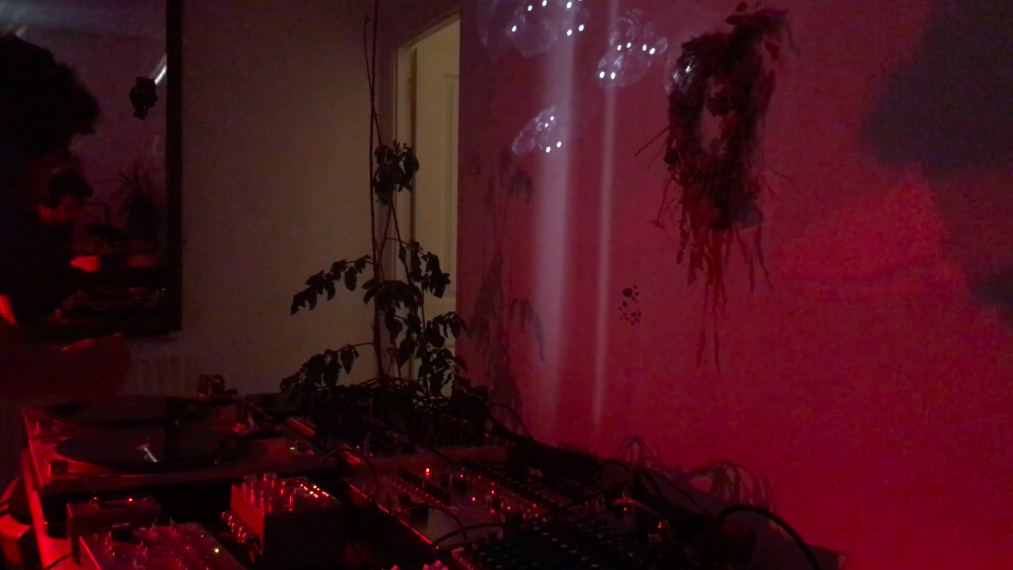 The blessing of the Pisces Rising by NATASHA LALL

There is a high chance that astrology is a load of bollocks but there are a few things I get out of it. Actually one or two things are very useful.

The first is a sense of belonging because for some reason astrology is a predominant part of lesbian culture. Don’t ask me why. I don’t really care why. Why not? I mean I was forced to study Christianity for a lot longer…lmao.

Anyway, I also find that regular horoscopes give me a sense of focus. That’s super useful for me. I find a lot of truth, or at least correlation, in my chart. 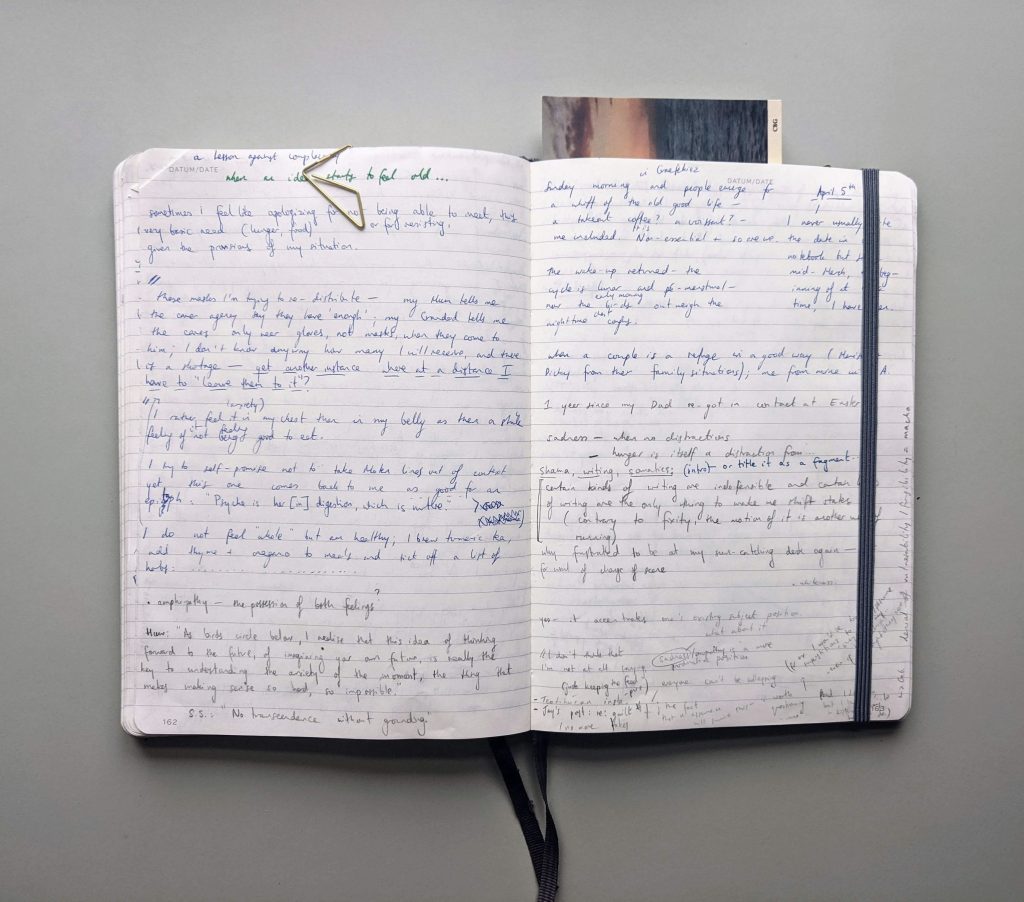 Notebook Score #2: The line of the hand throws the mind out of the body reading by HANNAH SATZ

This notebook practice represents a release of thought and feeling, in some sense counter to the control or fixity of Writing. It’s flighty – the motion of writing long-hand is another way of running – but the connection from hand to gut is also grounding; it earths me. I read fragments from the end of February to the end of April 2020, here and there; paragraphs, lines, or words from flicked through pages, self-censoring as I stumble and flow. It is meant, even in its inward-looking, to be a form of opening, an offering.

Listen to the reading

Peaceful in the rain in the order by DAN WALWIN 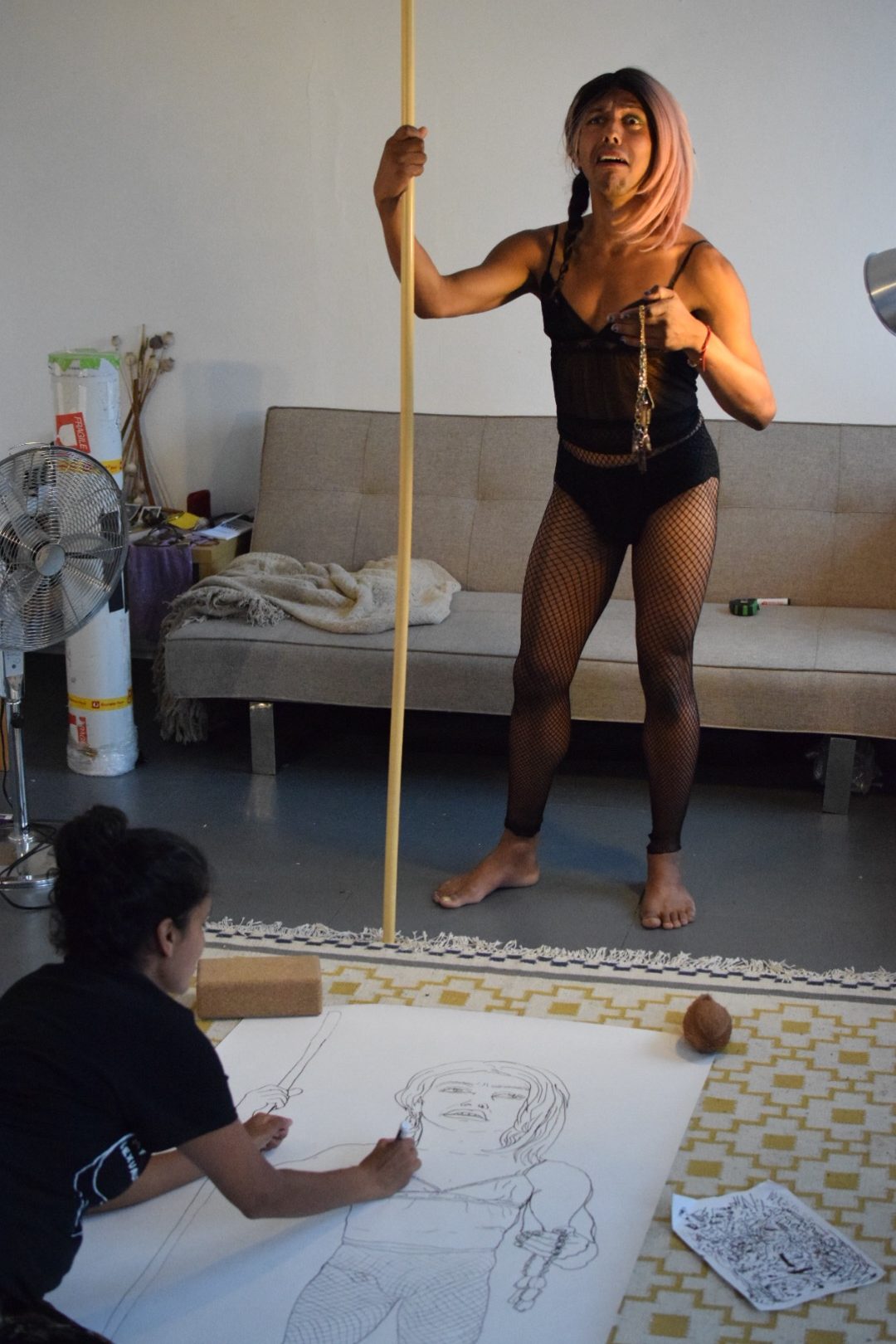 … There are so many more south Asians I’ve connected with whose lives are on tangents to mine here in London than back ‘home’. I’ve felt part of a cluster of brown and black artists working with care and integrity here, and have made more intergenerational connections. My parents migrated, and I was born, not long after the White Australia policies ended, there aren’t elder second generation POC migrants and I have very few peers my age at my intersections. …

… A decolonial practice for me is, during the creative process, letting go of imagining the white liberal audience reaction to the work and keeping present in mind myself and an audience who will feel empowerment through the work.

Read the interview in full … 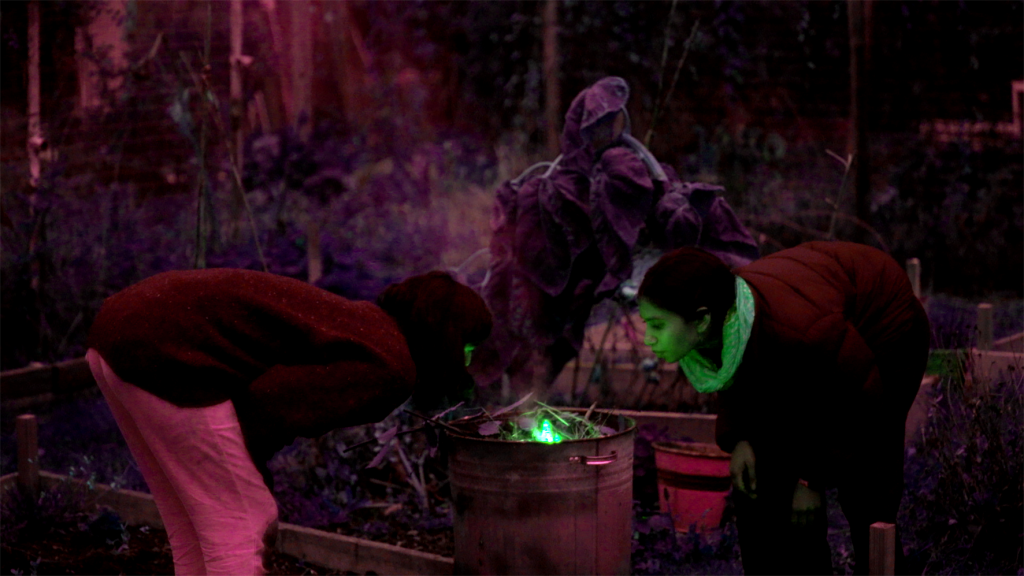 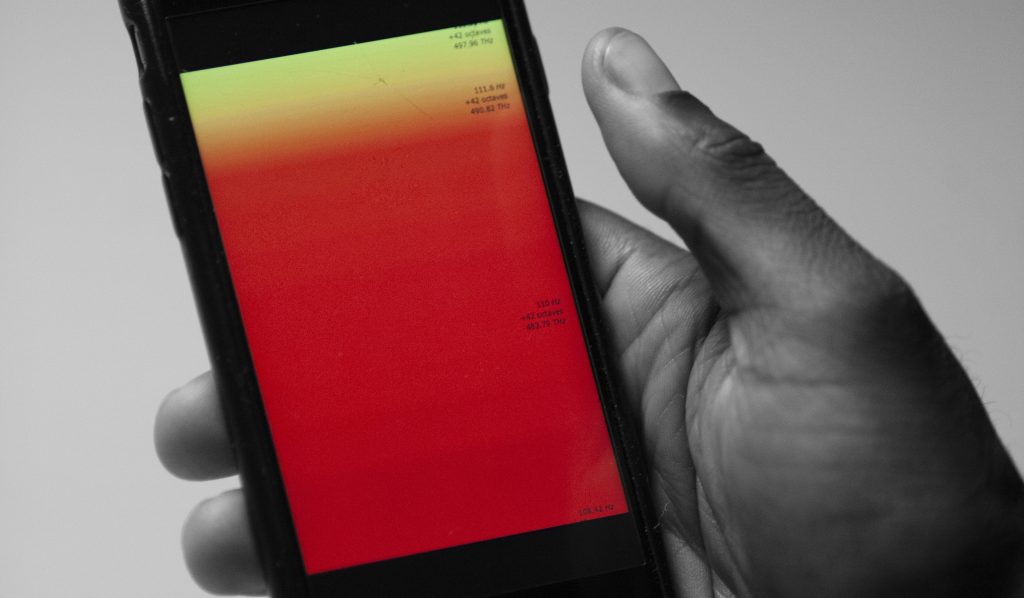 An Analog for Listening by NIKHIL VETTUKATTIL 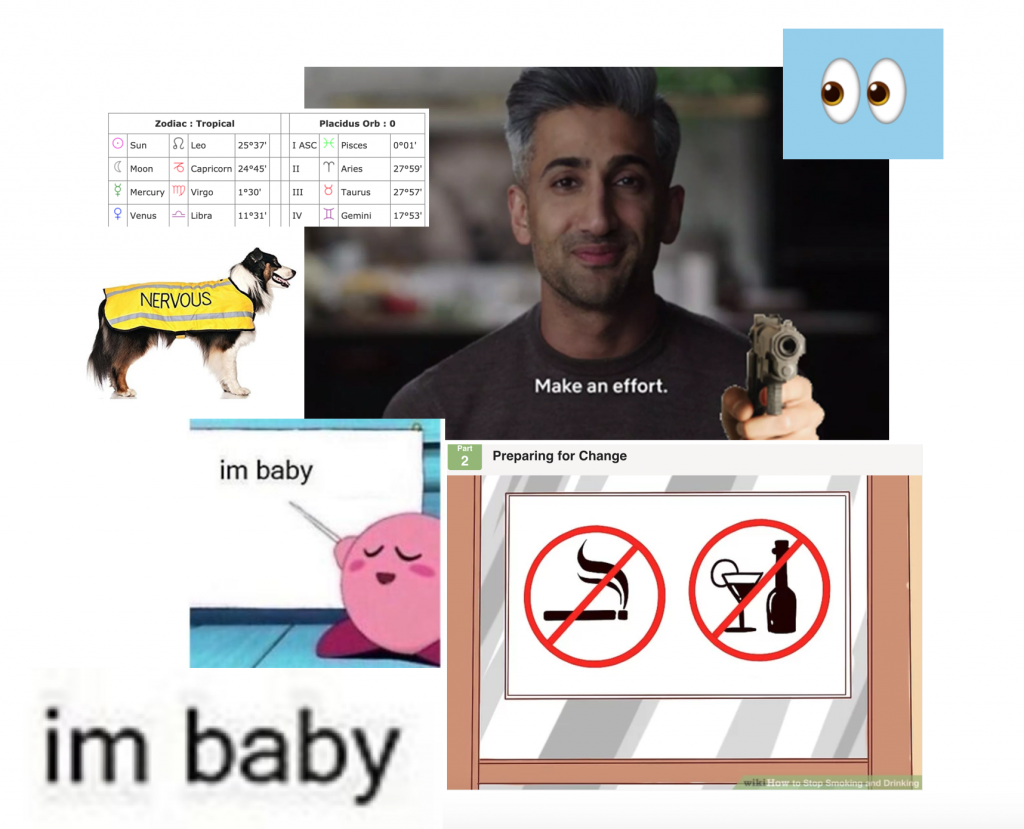 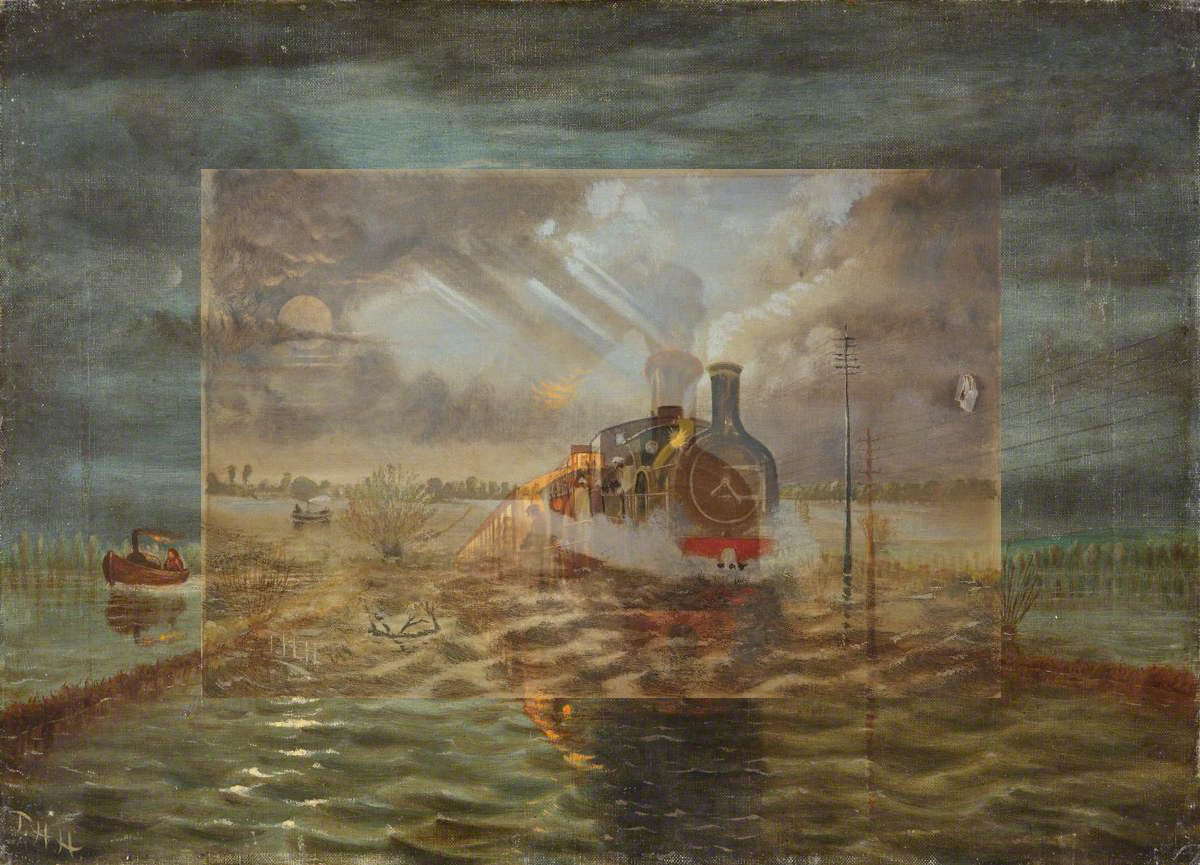 This long-term research and commissioning platform for artists’ moving image and network culture decentres hegemonic narratives of the visual arts, from the margins of the online. Flatness presents a porous context for artworks to be shared as part of a genuinely networked culture, at a distance from structurally unjust institutions and market-led forces of the web.

Flatness values artistic experimentation and minor, durational experiences of art on the web. It is curated from the perspective of a queer Brown sick womxn with the aim of uplifting conversations and creative practices which defy intersectional oppression.

The aim of the website’s interactive elements – the calendar and comments feed – is to build an active community around these works, in support of their critical and social contextualisation. All contributions are moderated according to our safer space commitment included below.

In 2019 the project relaunched with a new interactive design and a series of new artist commissions. This edition of the site has been an ‘unflattening of the screen’ with key elements of the work – in terms of healing and building solidarity – happening outside the frame of the site prompting a rethink in the way in which the site operates. Read more about this process of transformation here. Flatness reflects critically on the current context where freedom of expression on the internet is devalued by social media algorithms which help push hate and misinformation up the agenda.

For Flatness there is no way back to how things were before the pandemic. Horizons have opened up as we have witnessed how change – d i s m a n t l i n g – can be achieved through taking action (rather than defaulting to critique). Our voices are clear and powerful and being heard. We need to support each other to keep energies strong. QTIBPOC lead the way in this urgent work. Our transcendence of normalcy transforms expectations of transcendence through art. Donate to UK BLM here.

During the COVID 19 pandemic:

We hope readers are managing to keep well body and soul.

Notwithstanding the pain and hardship brought on by the catastrophe we are watching the internet come alive in this period as sharing becomes more focused on connecting. This drive could potentially recontextualise what it means to be isolated in the widest sense – whether through mental, physical and financial impairment and discrimination, to the isolation of work or the studio – beyond the immediate confines of lockdown. Following the strengthened impetus (towards mutual aid, and towards recovering the health of the planet) to break the loop of crisis capitalism and nurture the bonds between us, between April and August Flatness invited contributions for work which corresponded to:

– the ‘situation’;
– stillness and liveness (signals from rituals/ practice); or
– the ‘future’.

Live since 2013, Flatness is a long-running project curated and moderated by Shama Khanna offering artists and audiences a space for creativity away from structurally unjust institutions and market-led forces of the web. Help keep Flatness independent by donating to its supporters’ pool.

Read the latest ‘State of the Union‘ text by Shama Khanna from Autumn 2020.

Excerpt from an interview with Henry Broome for Spike Art Magazine from Autumn 2019:

How did Flatness first come about and what made you relaunch the platform this year?

… The new 2019 programme developed out of the political ruptures of 2016, also #MeToo, #BlackLivesMatter and the Arab Spring, movements mobilised by the internet. It’s also a reflection of my lived experience of the art industry where people of colour are in token ways hypervisible but structurally disempowered.

The platform provides a critical framework to understand social media’s empowering potential against its ultimately extractive and manipulative business models, as shown by Zuckerberg’s infamous hearing in late 2018. I think Flatness offers a mouldable alternative: You don’t need to log in or pay to view works and the site is free and open to all. It’s still possible to build your own spaces rather than succumb to the format of big monopoly platforms. As the founder of the World Wide Web, Tim Berners Lee said, the future of the internet relies on individuals making and adding to their own sites, and keeping control of their data.

Read the interview in full …

The web is not a neutral space. From its beginnings as a US defence initiative to improve communication with soldiers in remote places through to the privileged, racial capitalistic understanding of freedom and ‘making the world a better place’ the cis-white male Californian ideologists who continue to structure and profit from it maintain. There has been an equally long history of artists and technologists critiquing this version of its development (and structurally unjust institutions and practices in general) which Flatness supplements.

Flatness is working on becoming a safer and accessible space free from racism, sexism, ableism, ageism, classism, casteism, homophobia, transphobia, fatphobia, or hatefulness. Let us know if there are ways we can do this better.

Supported by public funding from the National Lottery through Arts Council England.

"It is the flattest and the dullest parts that in the end have the most life." Robert Bresson

Flatness is a multi-format research and commissioning project engaging in ideas around the screen-based image and immaterial culture after the internet. In inviting contributions by artists, writers and computer specialists the website flatness.eu seeks to test the possibilities and limitations of the web as a creative site and space for encountering artworks.

flatness.eu extends from the artists’ moving image programme ‘Flatness: Cinema after the Internet’ (featuring special screenings by artists Ed Atkins, Anthea Hamilton and Oliver Laric) curated for Kurzfilmtage Oberhausen 2013; returning to the small screen to present many of the works, research and writing about them, online.

Read an extended interview about the project in Rhizome.

Currently, Flatness is working in collaboration with super_filme, Berlin to curate warehouse, a programme of online and offline screenings, workshops, digital residencies and ethnographic research and writing on digital friction.

Flatness is curated by Shama Khanna